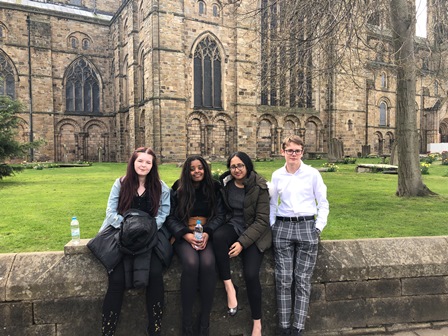 We took two teams to the Durham Schools Debating competition, the largest residential debate in the world with 150 teams from nearly forty schools competing. We were one of only four non-fee paying or non-selective schools participating. This was a steep learning curve for our new debater Hajra K who, guided by the experienced hands of her team mate Cate D, improved rapidly across the two days.

Jan and Lehtu had a remarkable competition comfortably making the novice semi-finals. Along the way they beat more experienced senior teams from Westminster College, St Pauls Girls’ School and George Heriot’s School among many others. Both teams debated on six motions ranging from abolishing the minimum wage, removing patents from pharmaceutics, considering the rise of ‘cultural cancelling’, and examining the merits of introducing a ‘negative vote’.

In the end it was only their age which stopped them progressing even further. The sixth formers they were up against simply had more knowledge.

Ahead of the ICYD finals at the end of this month we will be doing some serious cramming of economic principles, free market policies and electoral systems.