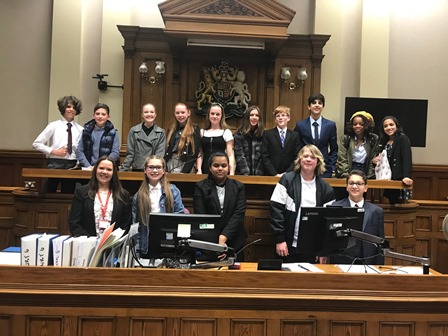 Liverpool College triumphed on Saturday when they became winners of the Magistrates Court Mock Trial Law Competition in Merseyside. The Magistrates’ mock trials are a national competition in which schools across the country analyse a court case and compete against each other. It aims to give Year 8 and Year 9 students an insight into the judicial system, the laws and how the courts function.

The event took place in Wirral Crown Court, in real court rooms, which were presided over by real Magistrates. The team, comprising of Year 8 Wilton Scholars, have been preparing for this event for several months and were incredibly fortunate to benefit from the support of Mrs Doran, Mrs Gill Ashworth (Senior Crown Court Prosecutor) and Judge, Mr Richard Baker, in preparing for the event. The team comprised of numerous individual roles including Magistrates, Legal Adviser, Prosecution Lawyer, Prosecution Witness, Defence Lawyer, Usher, Defence witness, Defendant and Court Reporter. During the competition, each role is scored individually meaning every pupil’s performance was vital. The event required weeks of preparation, both in school an at home, which culminated in an in school mock trial last week. Witnesses were expected to memorise their statements in order to answer the lawyer’s questions, and use their drama skills to convey their character. Lawyers were expected to come up with questions to bring forward their evidence from the witness, opening and closing speeches. Magistrates had to practise note taking skills while observing the trial, in order to make a decision as to whether the defendant was guilty or not. The legal advisor has to become familiar with the nuances of the law including the Turnball guidelines and Standard of Proof. Each part, regardless of its significance was integral to our success as a team.

After participating in a full day of trials against other schools on Saturday, the students were thrilled when announced overall winners of Merseyside – a truly incredible achievement.