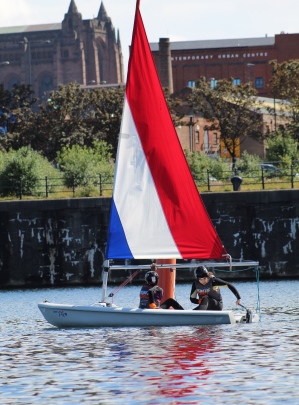 Some Year 9 pupils enjoyed a trip to the Liverpool Watersports Centre yesterday for an introduction to sailing organised by the CCF. Pupils reported back on their experience:

On Wednesday 19 June, a few pupils from Year 9 went to Liverpool Watersport Centre to do an introduction to sailing. When we got there we had a small group chat with a member of the water sports centre but he also worked for INEOS (who sponsor the sailing training).

INEOS are a British sailing team who compete all over the world. Their team principle is Sir Jim Ratcliffe, who is the 3rd richest man in the UK. He paid 51 million pounds for the American boat they use in competitions. The most famous crew member in Sir Ratcliffe’s team is Sir Ben Ainslie. He is their skipper who has won 4 gold medals at the Olympics. The skipper is responsible for the boat and is known as the heart of the vessel. Sir Ainslie got into sailing at the age of eight and entered his first competition at ten years old. By the age of nineteen he was chosen for his very first Olympic games. Since then he has become the most successful Olympic sailor ever to exist.

After we got shown what we would do and got told about INEOS we went to get changed into our gear. We wore a wet suit, a buoyancy aid, a helmet and an INEOS Rebel Crew bib. We were taken down to the water edge and were told to set up our sailing boats. We had to put the mast in position and lock it in; we put the boom on and opened up the sail. After we pushed the boat in the water we got in and we were sailing two minutes later. We got shown how the boat works and what to do. At this point everyone was really nervous but even more excited. We got used to the boat with only half a sail and once we were confident we opened it up to a full sail.

The weather couldn’t have been better. The sun was shining, the wind was strong but not to strong and the day was perfect. When you caught the wind in your sail you sped through the water really quickly. The feeling of the water splashing on you and the wind blowing in your face is one of the best feelings. Sailing requires a lot of concentration however it is really fun. One of the trickiest bits is when the boom moves to the other side and you and your partner have to change sides in the boat. The boat rocks and it feels like it is going to capsize any minute but you have to be confident and move to the other side while holding onto the rope. I think the best bit is when you finally pick up wind and you have control of the rudder and turn around in a circle.

Water sports is an experience which most people don’t really think of as an experience. It is really fun and you learn really good skills from it. Water sports improves your concentration skills, your listening skills and most importantly your team work skills. If you don’t like the idea of sailing, you can do wind surfing or learn how to drive a power boat. There is such a wide range of things to do in water sports and I would love to come back to do my stage one sailing certificate. Five months ago if you told me I would really enjoy water sports I would have laughed but now I can’t stay away from the water. Liverpool Watersports Centre offers so many opportunities and I would love to go back to do other water sport activities.

Thank you Liverpool Watersport Centre and INEOS for the amazing day the Year 9 group had!

My trip to the docks was very delightful, first we were told about the equipment we were going to use, got into our kit (wetsuit, buoyancy, bib and helmet) and set up our sailing boat. We were given head overs/snoods to wear and take home as a souvenir. The company was INEOS and we were sponsored by Jim Ratcliffe – the 3rd richest man in the U.K. I also learnt that you can do work experience there and get a part time job, which seems more exciting than working in an office all day.

The weather was perfect for sailing as it wasn’t too windy but there was a breeze and it was quite warm as well. At first, I was nervous and excited but getting on and sailing was fun. As I was sailing me and my friend took turns to steer and because we were doing so well we chose to go full sail; considering it was our first time. I thoroughly enjoyed it and would go back again.

The manager of the Watersports centre reported that it was a pleasure to have our pupils and they have been invited back in September so they can continue with their sailing experience.