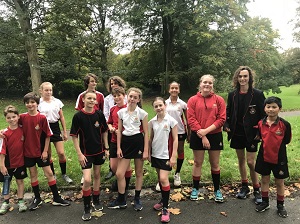 Brook's House Action this year is Intellectual, so the team decided on the charity KIND as its House charity as it helps local children from disadvantaged backgrounds receive the same opportunities so they can progress in education. KIND is a local Liverpool based charity that has been running since 1975.

In September, Stephen Yip, the Founder and CEO of KIND came to speak to Brook’s House. From the assembly, groups of pupils then worked together in their own time to raise money for the charity doing various events such as bake sales, sponsored read-a-thons and sponsored silences across the school.

On Monday 14 October, over 30 members from Brook's House, from Year 7-13, took part in a 1K fun run around Sefton Park to continue to raise money for KIND. There was great competition shown throughout the age ranges to try and beat one another, the top 3 fastest athletes were:

A few year groups are continuing to raise money over the half term before it is the turn of the next House to fundraise but as it currently stands the running total is a fantastic £1420.78! Particular congratulations to:

After the half term, the Pre Prep and Prep will also be passing on the money that Brook’s pupils in the primary phase have raised for KIND which will be added onto the total.

Stephen Yip will be coming back into the College in the first week back after half term to collect the money and pass on his thanks.