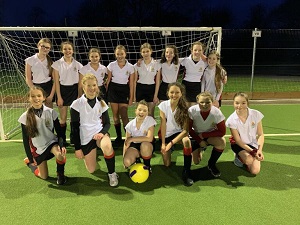 Liverpool College hosted St Julie’s on Thursday 14 November. This was the girls' second game this season. After being defeated by a strong St John Bosco team that same week, they were determined to get a win under their belt, but most importantly, improve their performance. From the start the girls were dominant in possession and created a few chances through Anna R and Amber S-H, only to fall wide of the post. Anna R was dominant in the midfield, challenging successfully for a lot of 50/50 balls.

The girls showed real promise in the first half battling for the ball and when they won the ball back they passed it effectively to each other to create more opportunities in front of goal. In the second half, the score was still goalless and either side created more and more chances. St Julie's played a good one-two down the line and crossed it in, which nearly went into the goal, only to be tipped over by our debutant goalkeeper Phoebe H (Year 7).

In the last ten minutes of the game, St Julie's applied more pressure onto Liverpool College, but Phoebe produced some strong, fine saves to keep the score goalless. Mischa O’C had the last chance of the game when it came to her feet unexpectedly, but she only managed to volley it high of the crossbar. In the end a fair result for both schools with a 0-0 draw. Player of the match was Phoebe H who played in goal for the first time, and produced some very strong saves to keep St Julie’s out.