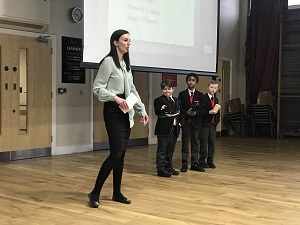 Pupils in Y4, 5 and 6 enjoyed a talk on Friday about Engineering from Mrs Diamond, a teacher in the secondary phase, who previously trained as a chemical engineer. Her engaging talk included battling the misconceptions surrounding Engineering - including gender stereotyping. Mrs Diamond brought with her two pupils who had participated in an Engineering project in the secondary phase called for Go4Set and they described what they had accomplished by taking part. Thank you to Mrs Diamond for taking the time to come and talk to the pupils about Engineering and what an incredibly interesting and rewarding career it could be.