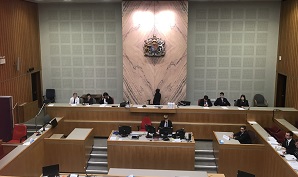 Last weekend, Year 9 pupils represented Liverpool College in the Young Citizens Mock Trial Competition.  The pupils have been working for the past month in order to prepare for mock trials, in which they competed against eight other schools across the North West.

Travelling to Mold Magistrates Court in Wales, the team of fifteen pupils represented Liverpool College brilliantly. During the event, the pupils assumed the roles of defence lawyers, magistrates, prosecution lawyers, a legal advisor, the defendant, the usher, witnesses and even a court artist. The magistrate court judges were extremely impressed with our team’s performance, with Liverpool College winning in three of the seven categories.

Thank you to the numerous legal professionals who have helped to prepare the team over the past few months, which has included a judge, a magistrate, a barrister, a police officer and a defence lawyer. Their help was invaluable. A massive congratulations to the entire Liverpool College Magistrates team.