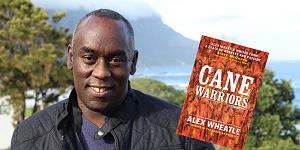 Year 6 pupils were extraordinarily lucky on Monday when they were able to meet Alex Wheatle, who earned an MBE in 2008 for his service to Literature. Alex is an award winning author winning the 2016 Guardian Children’s fiction Award for Crongton Knights. His latest novel, Cane Warriors, is the story of the emancipation of enslaved people from Jamaican plantations in 1760. Copies of this novel were kindly gifted to the school by BookTrust. Organised by Mrs Doran, pupils in Year 6 were offered the opportunity to ask this incredibly accomplished author questions about his journey into becoming a writer and he gave them the benefit of his experience as to how they can also fulfil their life’s potential. Alex shared with the pupils how he had grown up in the notorious Shirley Oaks children’s home in Croydon and how that shaped his early experiences. He discussed how his custodial sentence for his role in the Brixton riots became a crucial turning point in his life – allowing him time to reengage with reading and writing. Locally, Alex became know as the BrixtonBard. Alex was a truly inspirational speaker, impressing on the students the importance of education in transforming and modelling successful lives. Our sincere thanks to Alex for giving up his time so generously. We have invited him back to work with Key Stage 3 next term.