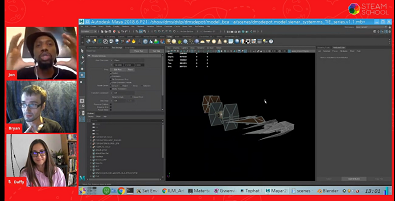 On Tuesday, Liverpool College was involved in an event out of this world when our Prep pupils were invited to attend a live workshop led by Industrial Light Magic.  ILM is the special effects company formed by George Lucas in 1975 to make the most successful movie series of all time – STAR WARS. The special effects company has since gone on to create over 300 blockbusters, such as Indiana Jones, Pirates of the Caribbean, Ghostbusters, Jurassic Park, Back to the Future, Spiderman, the Avengers films and the Transformers movies (to name just a few)!

The broadcast included a practical demonstration by actual artists, 3D modellers and special visual directors. They taught pupils the process of drawing Star Wars space vehicles from concept thumbnail sketches to 2D drawing from different perspectives followed by how to convert these drawings into a 3D models that can be brought to life on screen. Liverpool College pupils were then given an opportunity to present questions to some of the greatest special effects experts in the world. Thank you to Edward, Bailie, Leilani, Hannah and Emily for their wonderful questions,  STEAM schools for coordinating the event and of course ILM for their superb workshop.