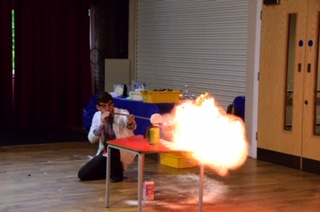 Our school has been filled with gasps, whoops, wows, screams, thuds, fizzes, sparks and bangs all week.

On Monday, we began our 3 day adventure into the three strands of science - Biology, Physics and Chemistry. We started with Biology, looking at 'Our Amazing Bodies' and we jumped straight into the gory and fascinating details that come with such a topic. We learnt about Marie Curie, a scientist who invested so much of her life into the discovery of new elements and processes that still have a huge impact on the way we treat illnesses and broken bones in our bodies to this day. The pupils then ventured off back to their classrooms where they dissected hearts, created blood, built rib cages, mapped out their bodies, printed their finger prints and built skeletons down in the Forest School.

Day 2 arrived and zapped us awake after such a busy first day. We met once again for an assembly where we learnt all about 'The Power of Electricity'. We looked at Thomas Edison and the resilience this man showed when creating the first successful light bulb for the world to use. We then got out our Van De Graff generator and hooked Miss Tomkins up to it so that we could charge her up to 100,000 volts. Fortunately for her, this was completely safe as we made sure she wasn't part of a complete circuit so that the charge merely built up inside her body rather than running through her. We watched then in amazement as her hair stood on end because she was so full of negative charge. Once we had safely discharged her we explored what other materials could build up static electricity. Did you know you can make Rice Crispies act like a firework? Once again, after this assembly the children shot like lightning back to their classrooms to charge up their own experiments. Here they explored the same static electricity that they had seen in assembly and tried to bend water, lift salt without touching it, stick balloons to the wall and create flying rings. They created circuits, baked electrical dough, and tried their best to receive no shocks.

If day 2 didn't shock them though, we made sure that day 3 would. Day 3 arrived with a bang, you might have heard it or at least heard about it. Our theme for this day was 'Chemical Reactions' and we definitely had a few of these up our sleeves. We started by looking at the famous scientist Alfred Nobel and looked at how his work of inventing dynamite had truly changed the world, but had it been a change for good or for bad? Eventually, we saw how this man left a legacy of peace and discovery in the form of the Nobel Prizes which also took us back to our first day of science week and our scientist Marie Curie who in-fact won 2 Nobel Prizes in her life. Not long after that, the environment became a little heated. We watched multiple endothermic reactions that wowed and amazed us. We created elephant toothpaste, lit up the room with glow sticks, created a fireball from the Great fire of London and sent a rocket flying across the room (the first attempt was extremely loud). From this the children were fired up to go out and create their own lava lamps and of course a huge variety of rockets.

What a week it's been. Bring on next year.