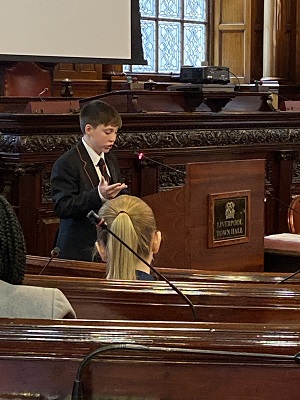 This year, we have six Year 9 pupils representing Liverpool College at the Schools’ Parliament. I have had the pleasure to accompany these pupils to two Upper House meetings at the Town Hall where they have taken part in a Meet the Decision Makers event and a European Youth Parliament debate.

During October half term, three of our pupils put themselves forward to be a Youth Mayor and all gave rousing speeches to the council chamber that they should be proud of! Harry D (Y9 Selwyn’s) was voted in as Young Mayor and has numerous events to attend in the coming months.

Last week, we all attended a meeting to discuss How to Make Liverpool a Safe City and found out how our pupils can contribute to Liverpool's bid to become a UNICEF Child Friendly City. Our pupils have all spoken and have been involved in healthy and stirring debates in the chamber on gang culture, climate change, knife crime and youth services and have done so with confidence and pride; we look forward to more meeting in the new year.