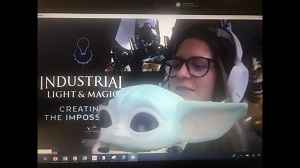 Prep pupils were given a superb opportunity on Thursday to participate in an exclusive talk led by Industrial Light and Magic -the visual effects company set up by George Lucas. Liverpool College was only one of 4 schools invited to this exclusive webinar - so this really was an exceptional opportunity for our pupils to be able to have their questions answered by world experts in art, animatronics, modelling and CGI. Two ILM experts showcased their superb skills -Sian Warren and Andrea Chiampo. Sian is a Creature Modeler and joined Industrial Light and Magic through the Jedi Academy Graduate Scheme in 2019, after graduating in Computer Animation. She gave a demonstration of how she uses the software ZBrush to create computer models. Pupils watched live as Sian turned a basic outline shape of a dinosaur into something that could have been used in Jurassic Park – how to model, adjust, reform and digitally paint the computerised animals in extraordinary detail.

Andrea Chiampo also showcased his work as a concept artist for ILM. Andrea gave the students a rare glimpse of the concept boards, the sketches, the warm up doodles and the final creative designs of a professional concept artist. Specialising in creature design for movies, Andrea demonstrated how he uses real creatures from the environment as his inspiration. For the next generation of concepts artists and designers, he suggested using the free software Pixologic Sculptris.

Congratulations to Jason S, Anya A, Michael R and Leilani B who were all able to ask questions during the talk. ILM have now launched a superb competition where pupils are encouraged to design their own creative predatory creatures that could live in an underwater world. The designs will be judged by artists, designers and modelling experts at Industrial Light and Magic. Specific details of this competition will be shared as soon as digital copies are received by the school.