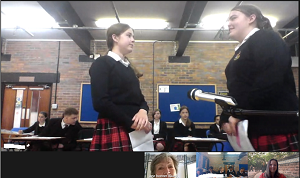 We would like to congratulate all Year 9 pupils who represented Liverpool College this week in the Young Citizens Magistrates Mock Trial Competition.  All Year 9 pupils were offered the opportunity to participate in this event, which helps young people gain an insight into the legal justice system. The event was launched by professional defence lawyer Sinead Fearson, from RMNJ Solicitors, in March. The participating students have been working for the past month on the project, including working with another lawyer, Mrs Parry, who kindly arranged one to one Teams meetings this week with pupils to help them prepare. During the event, pupils litigated a specially written criminal case on money laundering, assuming the roles of defence lawyers, magistrates, prosecution lawyers, a legal advisor, the defendant, the usher, witnesses and even a court reporter. The final mock trial, on Wednesday, was conducted virtually, presided over by experienced Magistrate Jane Bonner JP. The judges were extremely impressed with our team’s performance. Mrs Bonner commented on the ‘superb preparation, superb court manner, confident delivery of speeches and appropriate use of court language that made her feel as if she was in a real courtroom’. The pupils were described as ‘perceptive’ and as ‘extremely impressive’.